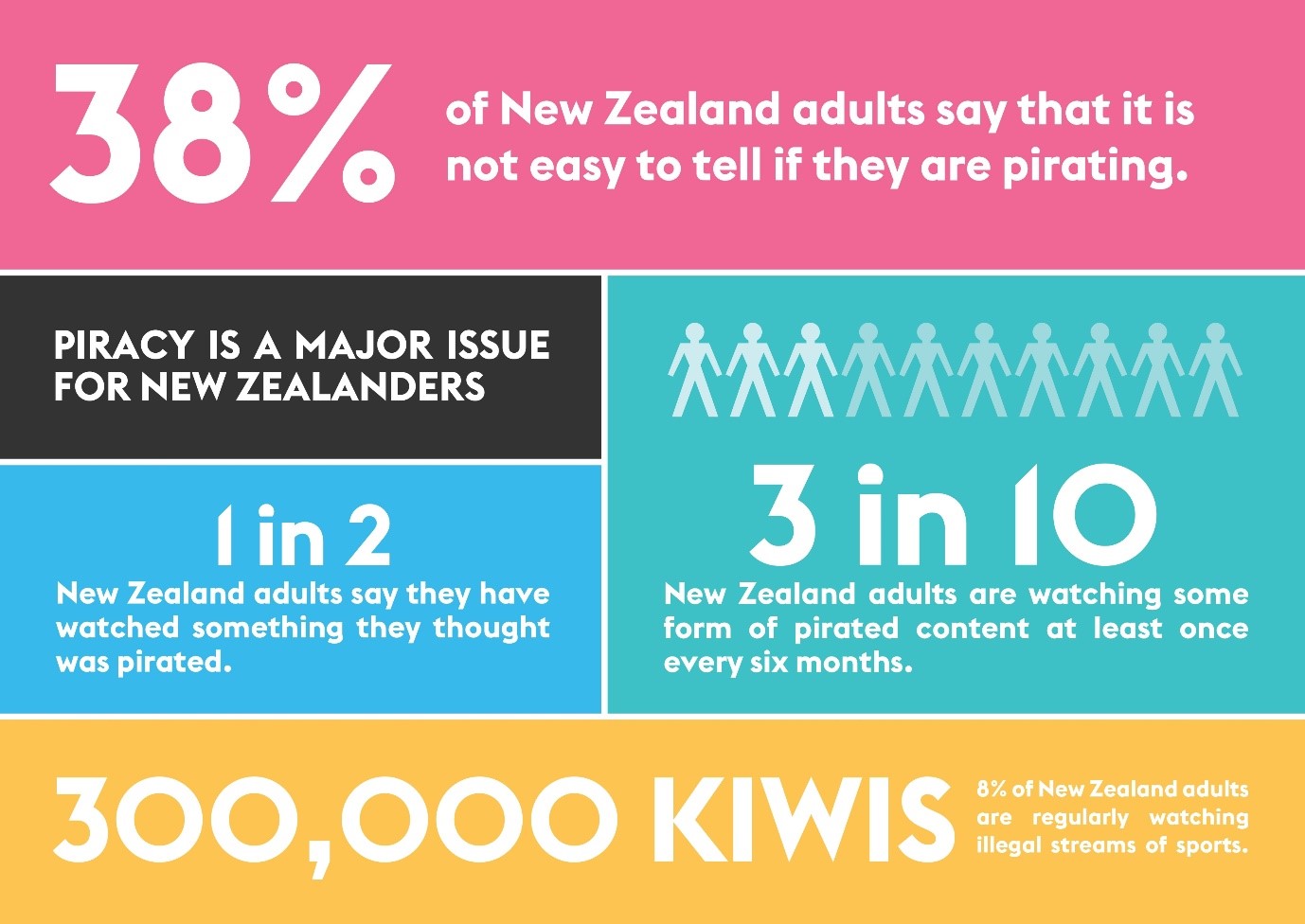 Research shows almost a third of New Zealanders regularly pirate sport and entertainment, either by downloading, streaming, using Kodi boxes or by other methods. And for 10% of New Zealanders, pirating is how they “normally” watch TV and movies.

The research was undertaken by The Navigators in May of this year. It involved just over 1000 New Zealand adults. The findings are consistent with piracy data in the New Zealand on Air “Where Are the Audiences” survey.

One finding that will be of particular concern for broadcasters and sports codes is the number of New Zealanders who are pirating live sport. 8% of New Zealanders – that’s over 300,000 people – are regularly watching illegal streams of sport.

“We’ve known that piracy is a problem for a while,” says SKY Television spokesperson Sophie Moloney, “but the scale is even bigger than we thought.

“If piracy remains unchecked, it risks really hurting the sports and entertainment industry in New Zealand, and our ability to create great content,” says Sophie.

“Not only do broadcast revenues fund sport competitions and the athletes,” says Sophie, “but there is a huge amount of effort from New Zealanders up and down the country that goes into creating, producing, and broadcasting live sports.

Across the board, people who pirate content had a good idea of its impact, with the majority agreeing creatives, workers in the creative industries suffer financial losses as a result.  They also agreed it’s a serious problem (49%), that they know lots of people who do it (82%), that it’s easy to do (80%), and that the likelihood of getting caught is slim (69%).

How are they pirating?

The research makes it clear that even with the wide range of legal options available in the New Zealand market, piracy is not declining. Downloading is down slightly (because it’s no longer the easiest way to access pirated content), while streaming continues to be prolific and easier to do.

According to The Navigators research, 5% of New Zealanders have used Kodi boxes or similar hardware to stream pirated content from the internet. The research also says that not all Kodi users find it very easy to tell whether what they’re watching is legitimate.

Why are they pirating?

The research reveals that 90% of non-pirates believe that piracy is motivated by people not wanting to pay.

But the reasons most pirates give is that the content isn’t available, is delayed in New Zealand, or it’s more convenient to pirate than subscribe.

“But we disagree. There are now so many legal ways for New Zealanders to view content online including Fan Pass, NEON, Netflix, Lightbox, Stuff Pix, TVNZ OnDemand and more,” says Sophie “so that excuse just doesn’t hold true.”

“We say if you really value great drama, movies and live sports then play fair and watch them legally.”

What can we do about it?

“Other countries are taking steps to stop piracy and encourage people not to steal content, and we want to do the same here in New Zealand, including by way of blocking pirate websites.”

One of the really interesting findings in the research is that New Zealanders don’t like the idea of people being personally prosecuted for pirating, and would prefer that piracy websites are blocked at the Internet Service Provider (ISP) level. The majority of non-pirates say they would be happy for their ISP to block access to a pirate website if it was required by the court to do this (68%), and even people who pirate agree to some extent on this course of action.

“Site-blocking is used in 42 countries around the world, including Australia and the UK. It’s good to see that many New Zealanders would prefer that these dodgy sites are blocked from view using this approach,” says Sophie.

“We are hoping that Kiwis will consider piracy’s potential impact on our creative industry and we want people to know there are plenty of ways to access your sports and entertainment legally,” says Sophie.

“If you love drama, movies and live sports, then please choose to watch legally.”